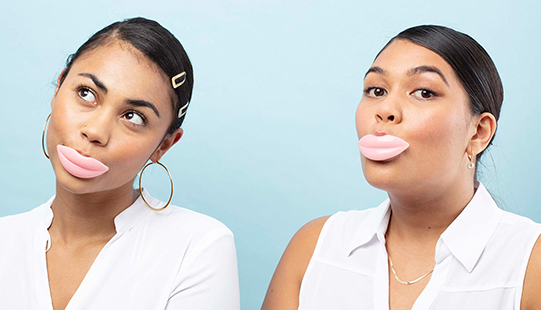 Meanwhile in Japan… we tried new tools from Japan

Meanwhile in Japan… we tried new tools from Japan

Beauty devices are the latest and greatest addition to the beauty scene, most of them being at-home versions of what might be used at an esthetician’s office. They are a level up from topical skincare—beauty devices promise to clear, refine, tighten and perfect skin just the same as creams and serums do, but instead, devices use more manual technological techniques to achieve their promises. So, if beauty devices are already a level above traditional skincare, how much more innovative could Japanese beauty devices be, knowing Japan is already ahead of the curve when it comes to beauty and wellness? If you recall DHC has a whole catalog of other products exclusive to Japan, so we took a look at some of the beauty devices DHC Japan carries to get a taste of what trending methods for achieving gorgeous skin is like in Japan.

Why it’s popular- Having defined features is a sought-after beauty ideal in Japan. Most women have naturally round faces and believe gadgets like this can help them achieve a sharper look.

How to use it- Place between lips and balance the gadget while saying “eeee” followed by “oooo” for five seconds, each. Having to balance the product is supposed to get the muscles to work harder.

Our verdict- It is quite hard to balance this product while saying “eeee” and “oooo”! After just a few seconds of repeating this exercise, we could feel our jaws and smiles getting tired! It feels comparable to smiling all day.

What it is- The genius in this device lies in the positioning of the two top knobs. When used on your skin, it can replicate the kneading of an esthetician’s hand massage. Kneading your skin with this massager can help stimulate collagen production, in turn leaving your skin looking tight and toned.

Why it’s popular- Because this tool helps stimulate blood circulation and collagen production, it can help in bringing forth bouncy, supple skin—key factors for having mochi-hada or rice-cake skin, an ever-popular trend in Japan.

How to use it- Roll across face and body in an upward motion. Change the angles for more or less pressure against the skin.

Our verdict- More than anything, this tool provides a very relaxing massage. It feels quite nice to roll across the face and loosen any tension being held. It also feels great on any muscles on the arms, legs, or shoulders! As far as having tighter and toned skin, we didn’t see that right away. It may take a manual tool like this longer than a couple of weeks to achieve those results.

A silicone version of an ancient Chinese beauty tool

Why it’s popular- With the rise of more holistic wellness practices (you may have seen jade rollers at your local beauty store!) gua shas have become a popular addition to skincare routines. Because they help the skin drain itself of toxins which can cause acne and imperfections, gua shas are in line with achieving Japan’s mochi-hada trend.

How to use it- With light pressure, scrape the gua sha across your skin in an upward motion, moving from the inside, out. The idea is to follow along the pathways of your lymphatic system so that the flushing out of toxins is done in harmony with your body.

Our verdict- Immediately after using this product, you do see a nice flush on your skin—a sign of good blood circulation! Like the face and body slimmer we tried above, this tool is a relaxing massage at the very least, and any of the skin-clearing benefits it claims to provide weren’t seen within the two weeks we tried this out.

What it is- This handheld device emits Radio Frequency waves which, when in contact with the skin, stimulate subdermal collagen production, helping reduce the appearance of fine lines and loose skin. In addition to the RF waves, the DHC Diamond Lift also emits LED lightwaves which can penetrate through the epidermis to treat specific skin concerns. Red light is said to rejuvenate the skin and improve dullness, blue light can combat acne and green light brightens the skin.

Why it’s popular- Because this device can emit RF waves and LED light at the same time, it’s a popular tool for anti-aging and overall beauty. And of course, anything that can help with anti-aging tends to find itself widely liked by skincare lovers!

How to use it- Concentrate device on an area of concern on the face, moving over to the next spot once the device beeps every ten seconds.

Our verdict- We tried this device on acne-prone skin for two weeks, every other night. At the end of the trial, we saw an improvement of breakouts on the face! The LED light seemed to help kill any acne-causing bacteria under the skin. As for the anti-aging claims, that is also something to be measured over a longer period of time.

An electric muscle stimulator for a non-surgical facelift

What it is- We’ve saved the best—and most intriguing—device for last! The DHC Perfect Wave is an electric muscle stimulator used primarily to perform at-home non-surgical facelifts. Sounds intense, right? That’s because it is! What the DHC Perfect Wave does is send 1.5kHZ of electric currents deep into your muscles, easily exercising the muscles of the face that are difficult to train manually. The intention is that by exercising the facial muscles, sagging, wrinkling and overall slacking of the face is prevented, or even reversed.

Why it’s popular- A youthful look is characterized by firm skin, unaffected by gravity. Because this device exercises your muscles to combat the natural effects of aging, electric muscle stimulation has become a popular beauty treatment, often performed at an esthetician’s office. DHC’s Perfect Wave is the first at-home device of it’s kind, making it perfectly safe to use on your own.

How it works- For the electric current to reach the facial muscles, an accompanying serum-gel, which acts as a conductor, is applied to the face. The machine will run for 10 minutes and beep at the five-minute mark, allowing the device to be used on each side of the face equally. Glide the electric muscle stimulator in an upward motion, concentrating on the primary facial muscles which include the cheekbones, smile lines and eyebrows.

Our verdict- We tried the Perfect Wave for two weeks, twice a week. The initial sensation of electric currents involuntarily moving your muscles was something to get used to. This device isn’t comforting or relaxing at all- in fact it almost feels a bit stressful! But it WORKS. Almost immediately after the first try, we could see the difference in our cheekbones and eyebrows being lifted slightly more upward. After two weeks, we could see the users face look noticeably defined and contoured!

Soft and supple skin is a sought-after beauty ideal in Japan and the world over. While these inventive and intriguing devices are only available from DHC in Japan, you can get DHC’s Japanese skincare here and now to help you achieve mochi-hada while you plan your next trip to Japan.